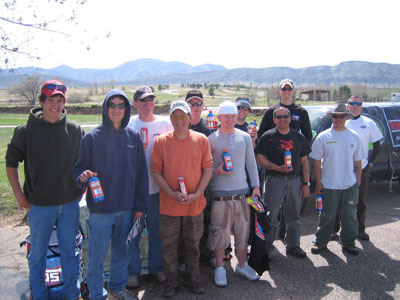 Only the heartiest bow fishermen (6 teams in all) braved the cold and wind to engage in the constant battle that was peering into the murky brown water in hopes of seeing a fish. Most saw none. One saw a single swimming slowly a few yards off shore. After a slow and steady draw, he loosed his arrow and it found its mark. That 13lbs 8oz common carp proved to be the only beast harvested during entire day.

Although the day was full of frustration and chill, we firmly believe that it only whetted the participants’ appetites for the upcoming May 17th statewide tournament.

A 100% cash payout and a Sportsman’s Warehouse gift certificate were given to the winning team “Florida Carp Killers”. We would like to thank everyone who came out and to our dedicated sponsors including NOS Energy Drink who provided free NOS drinks to all participants.

This was BAA Sanctioned tournament. Support bowfishing and join the COBF and BAA!